Last week I finished the Myths & Fairy Tales creative writing course run by Evolution Arts, Brighton (http://www.evolutionarts.org.uk/myths).  In addition to drawing stuff, writing stuff is something I enjoy devoting time to. Brighton boasts many platforms for creative writing and this year I wanted to explore some of these. In the last six months I’ve contributed stories to a few of the live literature events the city has to offer – Grit Lit, Rattle Tales and Are You Sitting Comfortably. In each of these I submitted a short story to be read to an audience and they were also opportunities to hear perfectly crafted gems from other writers too. I enjoyed the different atmospheres and sense of event with each one. The Myths & Fairy Tales course, however, was a different beast entirely. And it held different kinds of challenges and enjoyments to the staged readings of ‘live lit’. I hadn’t taken part in a creative writing course before, so I wasn’t sure what to expect but I soon found it to be a really useful resource for ideas, some of which turned out to be visual ideas. The course was divided into five themes, and in each section we considered the purpose of the theme, studied modern texts that were interpretations of this theme (from the likes of Angela Carter, Ted Hughes and Alice Hoffman) and then used a series of writing tasks to investigate our own ideas about them. These themes were: Red Riding Hood, Beasts & Monsters, Gods & Goddesses, The Underworld, Transformations. From notes, ideas and rough drawings in class, I created this series of five illustrations for each theme. 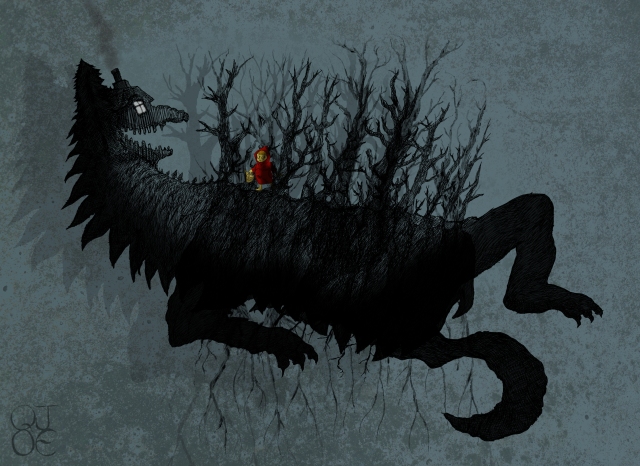